The museum’s outreach to schools and community groups has grown significantly since July 2017, when Jill Greenwood joined the staff as the Eric & Jane Nord Family Curator of Education. While the Allen has long partnered with Oberlin City Schools—all of the district’s second-grade classes visit the museum multiple times per year—during 2017–18, the museum also welcomed fifth and sixth graders from the nearby Lorain City School District and brought in Oberlin kids of many different ages. 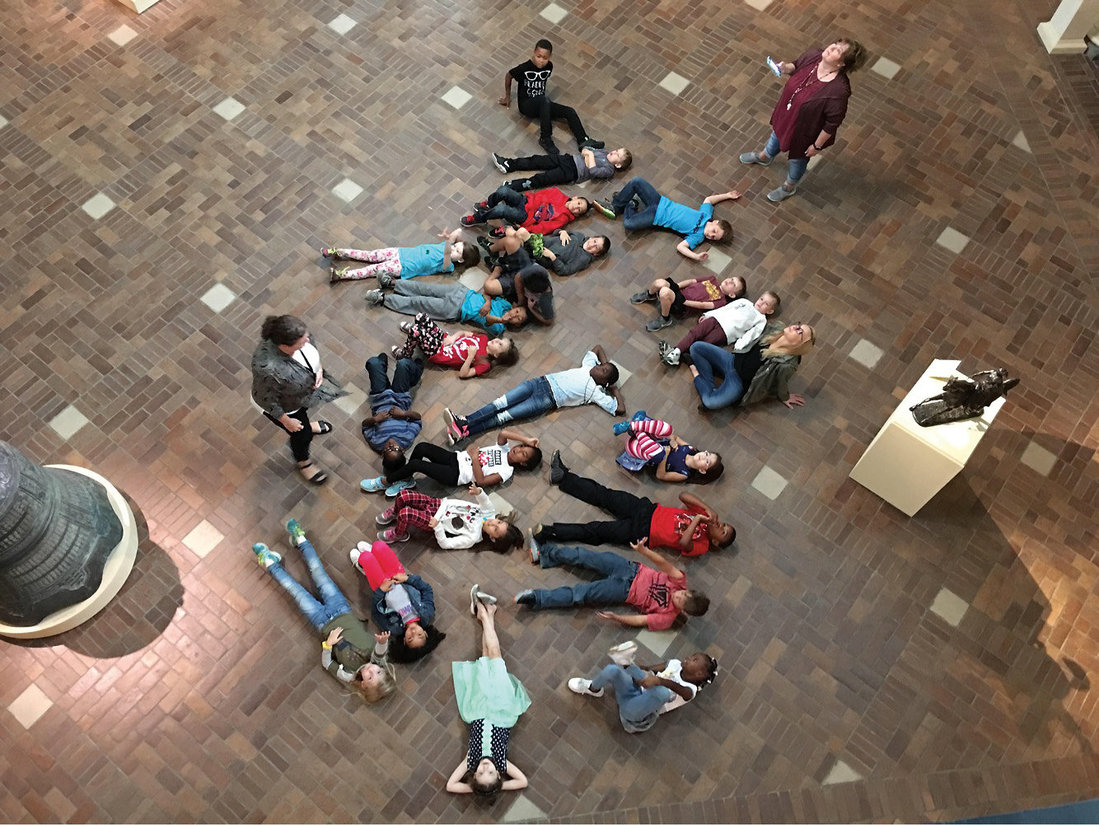 “Now more than ever,” Greenwood says, “it’s critical for museums to create tours that tie directly to the curriculum.” For example, all 340 fifth-grade students from Lorain city schools visited the Allen for tours focused on art of the Western hemisphere. Museum docents highlighted pre-Columbian and Native American works on view at the AMAM, along with landscapes by American painters. These classes also visited the Richard D. Baron ’64 Art Gallery to see an exhibition on the experiences of Japanese-Americans during World War II.

Another specialized tour was developed for 140 sixth graders involved in the “Stop the Hate” program at South Amherst Middle School. Students explored issues of racism and intolerance as depicted in works in the AMAM galleries, for example the anti-Semitic iconography in a 16th-century painting titled The Fountain of Life.

Oberlin College students in the Practicum in Museum Education course on a field trip to the Wexner Center for the Arts in Columbus, Ohio

Many museum tours are led by a corps of docents—Oberlin College students who have completed the month-long Practicum in Museum Education course offered each winter term. Course alumni often go on to give tours at the Allen, as well as assist in curatorial work. Greenwood, who teaches the practicum, says, “There are plenty of other colleges that have art museums, but most of them have graduate programs. The Allen gives invaluable work experience to undergraduates.” When Oberlin’s practicum class of 18 took field trips last January to art museums in Cleveland, Columbus, and Toledo, she says, “We were talking to alumni who went through the docent training program themselves.”

Greenwood also initiated pre-visit sessions for younger age groups, including newly engaged Oberlin kindergarten classes and preschoolers from the Kendal Early Learning Center. “The museum is a different space than they may have been in before,” she says, so she went into the schools to orient students and their teachers ahead of their class visits. “I want the students to feel comfortable in the museum and I strive to create a positive experience so they will want to return again and again,” said Greenwood.

The Allen is set to further elevate its profile in Lorain County starting this fall, with a two-year grant from the Freeman Foundation to strengthen museum education related to its extensive collection of Asian art. Funding will enable the Education Department to develop Asian-themed museum visits, in-school programs, workshops for K-12 teachers, and museum activities geared toward families. In addition to Greenwood’s close partnership with the schools in this endeavor, she will also work with a new education assistant and Kevin Greenwood, Joan L. Danforth Curator of Asian Art, to implement the grant.