How can Museum Labels be Antiracist?

How can Museum Labels be Antiracist? 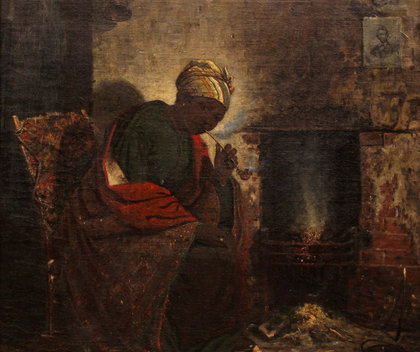 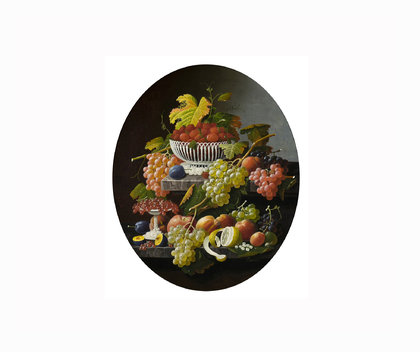 This experimental installation features two paintings that offer different visions of America in the years immediately following the Civil War (1861-1865): Still Life with Fruit by Severin Roesen and The Present by Thomas Satterwhite Noble. Throughout the academic year, we will take a range of approaches to interpreting them within an antiracist framework, asking questions such as: what are the visible and invisible values encoded in each work? Should the identity of an artist or the intended audience of a work affect how we interpret it? Who owned these paintings before they were acquired by the AMAM? Why and how did the museum acquire them?

We invite you to join us in exploring these and other questions as we consider how to be intentionally antiracist in our presentation of the permanent collection. To give us feedback or suggest new questions to address, please write to AMAMfeedback@oberlin.edu.

Below are labels from fall 2020 spring 2021, and summer 2021. You can also listen to Anna Farber ’21 and Gillian Ferguson ’23 sharing the labels they wrote as part of a student workshop on museum interpretation.

FALL 2020: What are the visible and invisible values encoded in these works?

An extravagant arrangement of fruit and grape vines spills out over the edge of a two-tiered marble tabletop. This stunning opulence is an impossible one: these fruits have different growing seasons and would never have appeared together on a 19th-century table. By uniting them here, Severin Roesen creates an enticing but fictional image of lavish abundance.

Following the Civil War, American politicians promoted a variety of fruit growing projects to unite farmers across the country in the shared goal of boosting the economy. These efforts drew on an established rhetoric of national expansion that advocated the “civilizing” of stolen Indigenous land by clearing it for agriculture. Roesen’s still life tacitly endorses this agenda by celebrating the bounty of American soil and the wealth generated by its cultivation.

But just as important as what Roesen includes in his painting is what he excludes. He places the fruits against a neutral background, removed from any evidence of their production, transport, or purchase. This allows us to enjoy a luscious scene without considering how these fruits came to be on this table. Today we might ask: what was the human and environmental impact of their cultivation? Who did this enterprise benefit and who did it harm?

A Black woman sits in a darkened kitchen near a smoldering fire. Wrapped in a shawl and smoking a pipe, she turns toward us. On the wall above the iron stove, Thomas Satterwhite Noble has included objects that might help us interpret this scene. Perhaps most recognizable is the image of Abraham Lincoln, who had been assassinated just three months before the painting was made. Does Lincoln’s portrait, with a feather behind it (likely signifying flight or freedom), communicate that this woman has already been emancipated? Or is this her hope for the future?

In the months leading up to the ratification of the 13th Amendment abolishing slavery, the representation of a Black woman with a portrait of Lincoln would have carried a clear antislavery message. Her humble surroundings remind us of her economic disenfranchisement and her isolation might allude to the cruel separation of families by slaveholders. But Noble excludes any overt references to the brutal physical reality of slavery in favor of emblems of freedom. Today we might ask: what is the effect of this omission? What would a more forceful image against slavery have looked like?

SPRING 2021: Should the identity of an artist or the intended audience of a work affect how we interpret it?

Through opulent displays of fruit such as this one, Severin Roesen brought northern European traditions of still-life painting to the parlors and dining rooms of America’s aspiring elite.

Roesen fled his native Germany in 1848 in the wake of failed uprisings against autocratic rule. While his political and social leanings are unknown, many of his compatriots came to America to escape persecution, bringing with them liberal social consciences and anti-slavery views.

After first settling in New York, Roesen moved in 1862 to Williamsport, Pennsylvania. Known as the “Lumber Capital of the World,” it boasted more millionaires per capita than any other American city and offered a ready market of lumber barons for Roesen’s work.

Paintings such as this one reflect an optimism and pride in the expanding country and its seemingly limitless bounty. Today we might ask: what role did Roesen’s still-lifes play in promoting a mindset among his industrialist patrons that natural resources could never be depleted? How did Roesen balance his (likely) liberal ideals with paintings that overlook the human and environmental costs of America’s territorial expansion?

After four years in the Confederate army, Thomas Satterwhite Noble surrendered in New Orleans in July 1865. That same month, he moved to St. Louis and made this painting. One in a trilogy intended to represent “The Past, Present, and Future Conditions of the Negro,” it shows its protagonist poised on the cusp of emancipation.

Following the Civil War, white Americans grappled with how to present the country’s history of slavery. Many, including Noble, focused on its abolition.

Noble’s paintings related to slavery were his first major commercial successes as an artist. He sold them primarily to northern businessmen and industrialists for as much as $10,000 (approximately $160,000 today).

Many of Noble’s patrons had benefited directly and indirectly from the labor of enslaved people and Noble himself grew up in a slaveholding family. Today we might ask: how did images like this one enable Noble’s patrons to construct an imagined history of slavery in America and their place in it? Was Noble a “reconstructed rebel,” as his patrons called him, atoning for his actions by making abolitionist images? Or was he just motivated by profit?

SUMMER 2021: Who owned these paintings before they were acquired by the AMAM? Why and how did the museum acquire them?

The history of this painting from its creation around 1865 to when it came to the AMAM in 2013 is fairly certain. It had been in the collection of a family in Williamsport, Pennsylvania, where Severin Roesen worked for several years. In 1980, a member of that family gave the painting to the Philadelphia Museum of Art. That museum already had several American fruit still lifes like this one, including one by Roesen, so they sold this painting in 2010 to finance the purchase of a flower still life by the artist. The AMAM purchased the work from a New York dealer in 2013.

Prior to this acquisition, the AMAM did not have any American food still lifes, a genre popularized by Roesen. Adding this work to the collection enables us to consider how such images of bounty contributed to American identity formation and national mythmaking after the Civil War. Roesen’s extravagant arrangement of a variety of fruits reflects an optimism and pride in the expanding country and its seemingly limitless resources. Hung in the dining rooms and parlors of industrialists and lumber barons, we might ask: did still lifes celebrating the abundance of American soil contribute to a mindset that endorsed the stealing of Indigenous land for white settlement and agricultural production?

This painting was part of a trilogy titled The Past, Present, and Future Conditions of the Negro. At some point after their creation, the three paintings were separated from each other. The location of The Past remains unknown; The Future appeared at a New York auction in 2006. The Present was in a Wisconsin family’s collection for several generations before a Cleveland gallery sold it to the AMAM in 2014. Made five months before the ratification of the 13th Amendment abolishing slavery, the trilogy presented an antislavery message by depicting three Black figures progressing from enslavement to emancipation to literate members of society.

The AMAM was eager to acquire The Present, given Oberlin’s history of abolitionism. However, the painting poses several challenges for its interpretation and display. Its presentation of a “civilizing narrative” for previously enslaved people, while common at the time, is racist. The artist’s identity as a white man, former Confederate soldier, and son of a slaveholder introduces further questions regarding his motivations: do these imagined scenes of Black American life, and the financial gains he enjoyed from selling them, amount to a continued form of exploitation?

When we encounter works of art in a museum, their labels often give the impression that there’s only one way to interpret th... 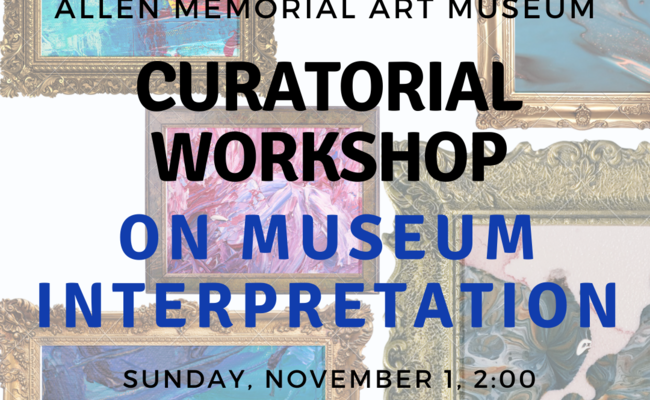 Discover the different—and sometimes competing—visions of America beneath the surface of Severin Roesen’s Still ... 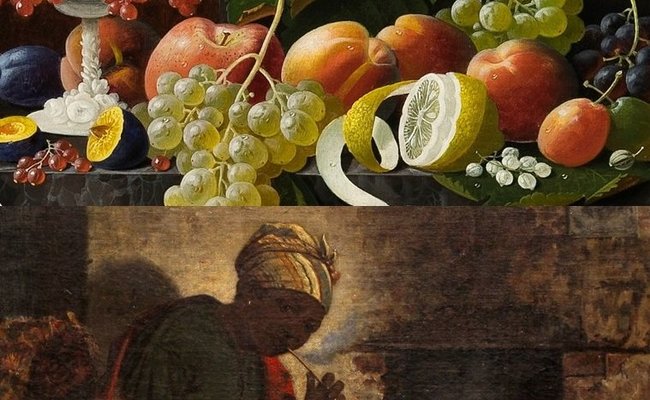 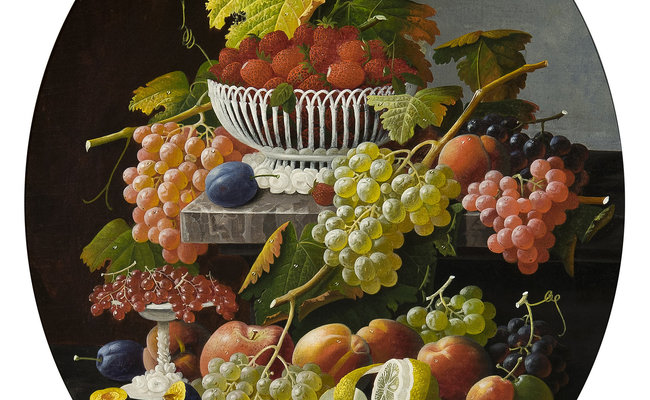