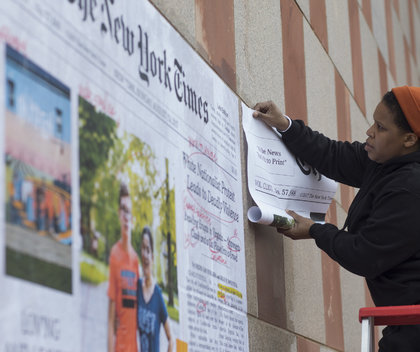 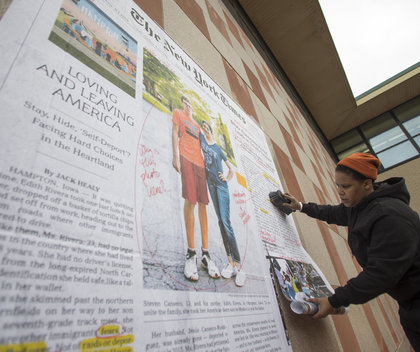 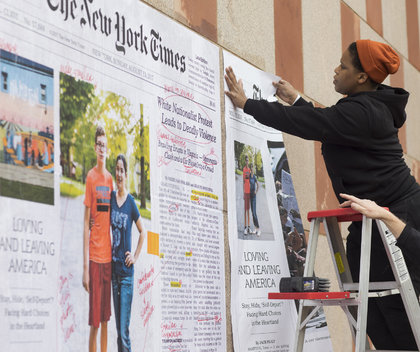 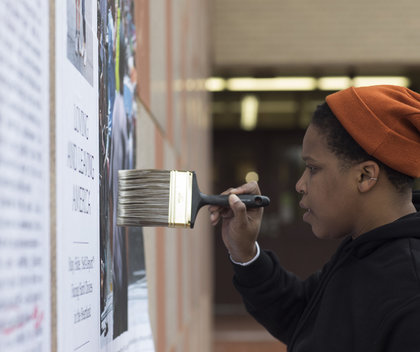 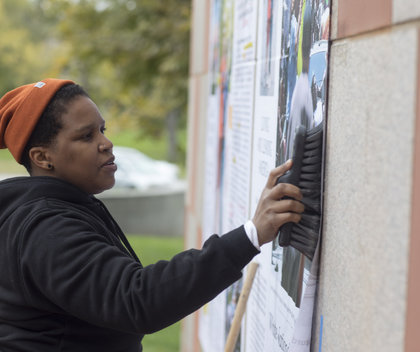 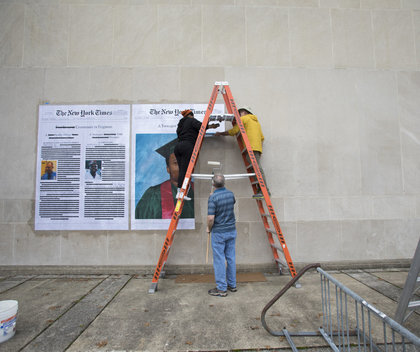 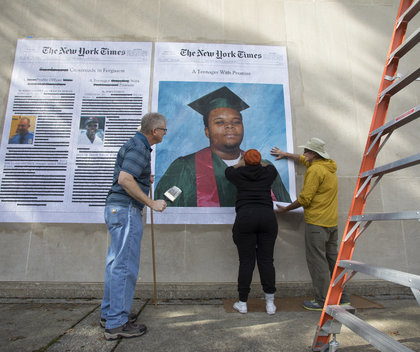 Brooklyn-based artist Alexandra Bell mounted large-scale works on the exteriors of two campus buildings—Terrell Main Library and the Allen Memorial Art Museum—as part of her Counternarratives project, which calls attention to how issues around race and violence are reported in the New York Times.

Since 2016, Bell has used walls in public locations to mount photo-based works that dissect news coverage, ranging from police violence to athletic competitions. The works reveal biases and assumptions about race, gender, and power. The Brooklyn-based artist, who holds a master’s degree in journalism from Columbia University, urges viewers to think critically about the circulation and consumption of news and the politics of the narratives presented.

A number of other campuses have hosted Bell’s Counternarratives project, including Bennington College in Vermont, Pomona College in California, and the University of Kansas.

“Bell’s work is viscerally powerful, and I knew the first time I saw one of her Counternarratives that I wanted to bring her to Oberlin,” says Andrea Gyorody, Ellen Johnson ’33 Assistant Curator of Modern and Contemporary Art. “What she’s doing, across the visual arts, journalism, and activism is timely and critically important. It’s difficult work that Oberlin students are ready to engage on all levels, and I hope it sparks conversations in and outside of the classroom.”

Bell’s 2017 work, A Teenager With Promise, will be installed on the façade of Mudd Center, which houses the Terrell Main Library. The work responds to news reporting of the 2014 police shooting of Michael Brown, an unarmed black 18-year-old in Ferguson, Missouri. A second work, Charlottesville, will be mounted on the Venturi Addition, which conjoins the Allen Memorial Art Museum and the Department of Art. This diptych deconstructs a front page New York Times report on an August 2017 march by torch-bearing white nationalists and the large counter protests that ensued.

As part of her visit, Bell also gave a public lecture and met with a small group of Oberlin students to discuss journalism, ethics, implicit bias, racism, privilege, and the critical reading of both texts and images (and how they interact with one another).