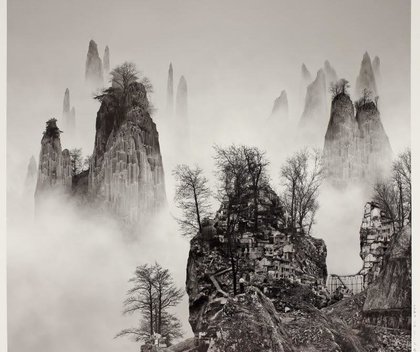 Works by three contemporary artists express visions of the fractured relationship between humanity and nature arising in the wake of rapid economic development in East Asia.

In his digital collages and videos, Yang Yongliang (Chinese, b. 1980) merges compositions based on traditional Chinese landscape painting with details from photographs taken in urban settings. Worlds Apart includes a three-channel video by Yang, titled Journey to the Dark (2017), along with a digital photographic collage from the Allen’s collection.

Sandra Eula Lee, a Korean-American artist (b. 1976), has loaned two sculptures and a series of 13 multimedia works on paper for the exhibition. She uses industrial detritus and cast-off construction materials in works that examine the increasing speed of urbanization and the erasure of place, people, and memory that result.

Yun-Fei Ji (Chinese, b. 1963) presents two works—one a 60-foot handscroll— executed in traditional Chinese styles and mediums (in this case watercolor and ink) that underscore the impact of callous government policies on local communities. Both works are on loan from the artist and James Cohan, New York.

“In the past, the urban elite in East Asia created an idealized, domesticated kind of nature in landscape painting and private gardens, using these mediums as a form of escape from their daily anxieties,” said Kevin R. E. Greenwood, the museum’s Joan L. Danforth Curator of Asian Art. “By adapting and updating these earlier traditions,” he asks, “do the works in this exhibition suggest that, in the face of accelerating development, such escape may no longer be possible?”

"Worlds Apart" was organized by Greenwood with Elka Lee-Shapiro (OC ’18) and Ramzy Lakos (OC '18), curatorial assistants in Asian art. The exhibition is supported, in part, by a Luce Initiative on Asian Studies and the Environment (LIASE) grant to Oberlin College from the Henry Luce Foundation.