A Different Kind of Picture: Pinhole Photography by Adam Fuss

A Different Kind of Picture: Pinhole Photography by Adam Fuss 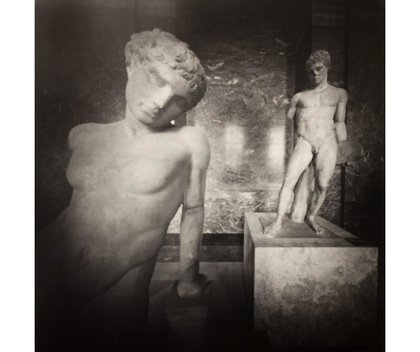 Adam Fuss moved to New York in 1982 and took a job as a waiter at the Metropolitan Museum of Art, where catering evening events allowed him to spend time in the galleries, completely alone. Fuss became particularly fascinated with the Greek and Roman sculptures and how, “at night, they’d come alive.” Already a photographer experimenting with alternative photography methods, he found that using a pinhole camera in the deserted galleries resulted in images that came close to capturing the essence of the statues. The images disrupted habitual ways of seeing and opened a space where the works could, in his words, “breathe.”

A Different Kind of Picture: Pinhole Photography by Adam Fuss brings together Fuss’s pinhole photographs taken at the Met and elsewhere. Representing classical sculpture from three different museums, this selection, like Fuss’s artistic practice, overrides the curatorial authority of these institutions and presents familiar iconographies in an unexpected, intimate way. The exhibition places Fuss in dialogue with the recent widespread acceptance that ancient sculptures would have been polychromed, or covered in pigment and gilding.

Contemporary attention to this practice compels modern viewers to recognize that the white marble forms we see today would have represented a variety of skin tones in their original context. The imperative to see these sculptures in color dovetails with Fuss’s desire to give new life and immediacy to his ancient subjects, thus creating “a different kind of picture.”