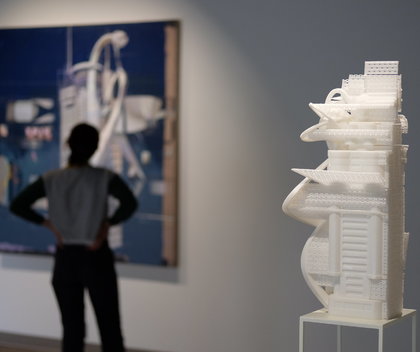 Born in the 1980s, Shanghai-based artist Cui Jie belongs to the post-Mao generation of globally conscious Chinese artists whose work renounces the Socialist political agenda prevalent in the previous era. Raised in Shanghai and schooled in Hangzhou, Cui experienced firsthand the architectural transformation of China into the modern megalopolis that it is today, giving her work across mediums a sense of velocity.

Cui’s exhibition for the FRONT Triennial—her first solo presentation in the United States—comprises paintings, drawings, and 3D-printed sculptures. Modeled on existing structures, such as the Shanghai Bank Tower, Cui’s paintings fantasize her subjects by employing a painterly style and visual grammar that marries the artist’s academic study of modernism with dystopian surrealism.

For the run of the exhibition, the Richard D. Baron ’64 Art Gallery will be open Fridays and Saturdays from 10 a.m. to 5 p.m., and Sundays from 1 p.m. to 5 p.m. See details below for related public programs.

FRONT International: Cleveland Triennial for Contemporary Art is an exhibition comprising artist commissions, performances, films, and public programs launching, in its inaugural edition, in July of 2018. An American City: Eleven Cultural Exercises, in collaboration with museums, civic institutions, and alternative spaces across Cleveland, Akron, and Oberlin, showcases an ambitious roster of projects, including performance and theater throughout the landscape and built environment. With a roster of national, international, and area-based artists at all points in their careers, FRONT examines the ever-changing and politically urgent conditions of an American city.