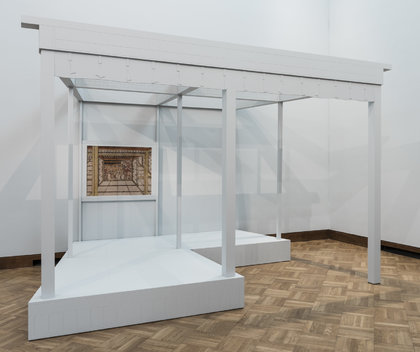 At the invitation of the FRONT Triennial, Barbara Bloom has created a work specifically for the Ellen Johnson Gallery. Part of an addition to the museum, the space was designed by the architect Robert Venturi in the 1970s and named after Oberlin College’s esteemed professor of modern and contemporary art. Far from a neutral white cube, the Johnson Gallery is a complex space that, in Bloom’s words, “screams ‘Architecture’ with a capital A.”

Rather than ignore the gallery’s eccentricities, Bloom has chosen to accentuate them through a carefully curated and placed selection of works from the collection of the Allen Memorial Art Museum, all of which depict architecture in some form. The works featured include paintings, prints, drawings, and photographs from a wide range of cultures and time periods. They are shown using a variety of display devices that allow the viewer to navigate the space architecturally, and to experience these works as though they are willing themselves off of the two-dimensional plane and into the third dimension. This process of reverse-rendering the works into three dimensions highlights and heightens their architectural essences, and further directs attention back to the space of the gallery itself.

FRONT International: Cleveland Triennial for Contemporary Art is an exhibition comprising artist commissions, performances, films, and public programs launching, in its inaugural edition, in July of 2018. An American City: Eleven Cultural Exercises, in collaboration with museums, civic institutions, and alternative spaces across Cleveland, Akron, and Oberlin, showcases an ambitious roster of projects, including performance and theater throughout the landscape and built environment. With a roster of national, international, and area-based artists at all points in their careers, FRONT examines the ever-changing and politically urgent conditions of an American city.