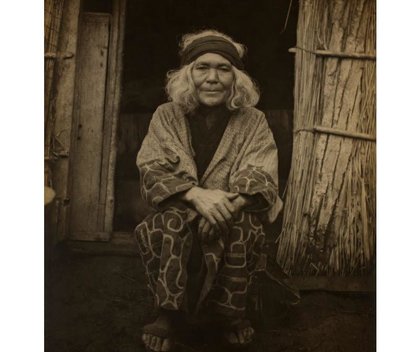 In 1908, photographer Arnold Genthe (1869–1942) spent six months in Japan, taking pictures of its people and landscapes. This exhibition presents a selection of Genthe’s photographs from that visit, from idyllic natural vistas, historic sites, and bustling street scenes to portraits of members of an Ainu community on the northernmost main island of Hokkaido, then a remote frontier of the growing Japanese empire. The photographs capture Japan at a time of dynamic social and technological development, an aspect the artist seems to downplay in his beautiful and serene images.

Arnold Genthe was born in Berlin, Germany, the son of a professor of Greek and Latin. Genthe initially pursued an academic career, receiving a doctorate in classical philology in 1894. The following year, however, he emigrated to the United States to work as a tutor for the son of a German aristocrat living in San Francisco. Genthe took up photography—at first to send pictures home with his letters—and the art soon came to dominate his life. He opened his first studio in San Francisco in the late 1890s, gaining fame for society portraits as well as pictures of the Chinese community in Chinatown.

These are now some of the only surviving records of the early years of Chinatown, before it was destroyed in the 1906 earthquake and fire. Genthe’s images of the earthquake’s aftermath brought him national recognition, and in 1911 he relocated to New York City, where he established a high-end portrait studio that attracted many celebrities. He is best known for his dance and theater portraits.

In 2017, Christopher Thomas (OC ’75) gave the AMAM a collection of Arnold Genthe photographs, including 44 of the Chinatown pictures and 71 from the trip to Japan. Genthe’s biography recounts some of the sites and areas he visited in Japan, but only a few of his Japan photographs have ever been tied to specific locations. This exhibition may be the first to do so. Chie Sakakibara, assistant professor of environmental studies and East Asian studies at Oberlin College, was able to identify many of the locations through friends and colleagues in Japan.