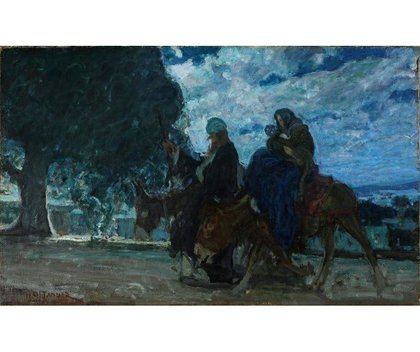 In 2017, the AMAM acquired the first painting by the artist Henry Ossawa Tanner to enter the collection, depicting the Holy Family fleeing to Egypt following King Herod's decree that all the young boys in Bethlehem should be killed.

Tanner, who had studied in Philadelphia with Thomas Eakins, and later in Paris, was deeply devout. Following his second trip to the Holy Land in 1898 he made at least 15 paintings on this same theme. Here, in a nocturne with loose brushwork that heightens the drama of the scene, Joseph, Mary, and the baby Jesus are shown as refugees escaping on a pair of donkeys under cover of night.

The acquisition of this painting marks a significant addition to the museum's collection of modern art and to its holdings of works by African American artists.