Exploring Reciprocity: The Power of Animals in Non-Western Art

Exploring Reciprocity: The Power of Animals in Non-Western Art 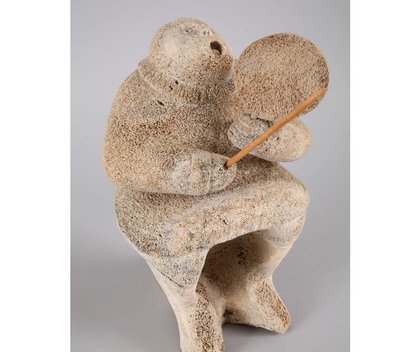 Animals act as companions and contributors to human life in this evocative exhibition featuring works that range from Japanese woodblock prints to whalebone sculptures of indigenous North America. Reciprocal relationships between humans and animals are fundamental to the traditional moral philosophies of numerous non-Western societies, and many contemporary indigenous communities draw on these relationships as a resource in the face of colonialism, exploitation, and environmental devastation.

The works in this exhibition vividly depict those relationships, as they have been imagined by peoples across time and space. A 19th-century Japanese woodblock print renders anthropomorphic catfish rescuing humans in the wake of a series of cataclysmic earthquakes. A late 20th-century Inuit sculpture features human faces carved of walrus ivory and framed with baleen hair, nestled inside the skull of a polar bear. A tempera work depicting brightly colored horses fleeing hungry wolves, created in the 1920s by Taos Pueblo artist Pop Chalee, conveys a profound respect for the natural environment, in which humans are always implicated.

Exploring Reciprocity is curated by Assistant Professor of Environmental Studies Chie Sakakibara in conjunction with her spring 2017 courses “Indigenous Environmentalism” and “Nature, Culture, and Interpretation.” Curatorial assistance was provided by Liliana Milkova and Sam Tunick ’18.