Black to the Powers of Ten

Black to the Powers of Ten 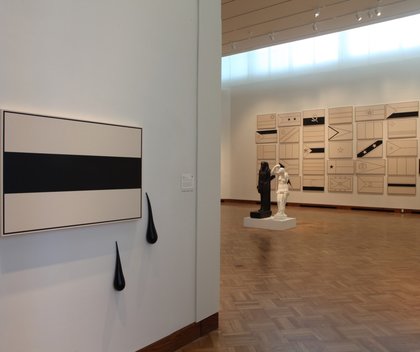 Race, time, memory, and meaning are among the concepts explored in this exhibition of works from 2003–2014 by the artist Fred Wilson. Through glass works designed and fabricated in Murano and the Seattle area, as well as in paintings, sculpture, prints, and video, Wilson challenges assumptions about history, culture, and display practices, offering alternative interpretations and encouraging viewers to reconsider how they think and what they know.

A 1999 recipient of the John D. and Catherine T. MacArthur Foundation’s “genius” grant, Wilson is well-known for re-animating museum collections through his unorthodox installations, as he has done presently in the Allen Memorial Art Museum’s King Sculpture Court. In the Ellen Johnson Gallery, works created by him similarly ask visitors to think deeply about embedded assumptions.

Wilson represented the United States at the Venice Biennale in 2003, working there with traditional glassmakers to make black versions of 18th-century forms such as chandeliers and mirrors, highlighting the color in relation to race and mourning. His earlier experimentation with glass in 2001 in Seattle led to the black drips also seen here. The flag paintings, marked by an absence of color, ask visitors to think about nationhood and representation, while his sculptures call into question received historical narratives.

A print series and the video September Dream, the latter shown at the 2003 Venice Biennale, present other aspects of Wilson’s work. Ink spots on the prints are in some cases accompanied by texts spoken by black characters from classic literature, while the video offers an alternate viewing of Shakespeare’s Othello, bringing to the fore themes of violence and nostalgia for the world prior to September 11. The title of the present exhibition refers to the 1968 and 1977 short documentary films Powers of Ten by Charles and Ray Eames, which examine the universe on its most macro and atomic levels.

Organized in conjunction with the artist by Denise Birkhofer, Ellen Johnson ’33 Curator of Modern and Contemporary Art