Conserving works of art damaged by time and other factors is both an art and a science.

Cleopatra, a painting by Giampietrino dating to about 1515, has been conserved through a grant from the Samuel H. Kress Foundation.

Conserving works of art damaged by time and other factors is both an art and a science.

Cleopatra, a painting by Giampietrino dating to about 1515, has been conserved through a grant from the Samuel H. Kress Foundation.
In this section...

We place a high priority on the care of objects in the permanent collection. See some recent conservation projects and local resources.

The Allen undertakes conservation projects as needed to maintain the integrity of objects, to prevent deterioration, and to restore the appearance of works. Often, conservation measures are applied when an object travels for exhibition at another museum.

While the AMAM consults with a range of conservators with a variety of specializations, many of our conservation projects are overseen by ICA-Art Conservation. Founded in 1952 in the museum itself by AMAM director Charles Parkhurst, the ICA relocated from Oberlin to Cleveland in 2003.

Planning for conservation of the museum's painted ceiling and clerestory began in 2012 and work began in earnest—fully visible to museum visitors—in June 2014. ICA-Art Conservation of Cleveland completed the project in early spring 2015.

Conservators carefully revealed the color and detail of Frederick J. Wiley’s painted decorations, which were designed in concert with architect Cass Gilbert for the 1917 building.

The project would not have been possible without a lead gifts from very generous individuals. The project engendered very broad support: more than 95 members of the classes of 1964 and 1965 designated 50th reunion gifts to it and significant donations came in from scores of other museum supporters.

Two separate but related projects were the installation of new lighting systems in the KSC and Ripin Gallery. Like the 1917 chandelier that graces the King Sculpture Court, these now use energy-saving LED bulbs.

Learn More About this Project 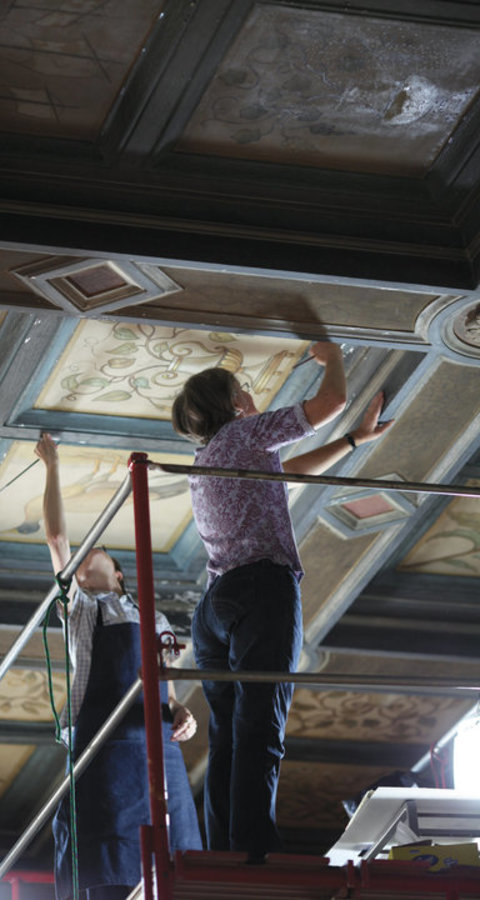 Paintings on the coffered ceiling and clerestory of the King Sculpture Court were returned to their original splendor by ICA-Art Conservation of Cleveland.

From 2010 to 2012, the painting Cleopatra by Giampietrino was conserved by ICA-Art Conservation through a grant from the Samuel H. Kress Foundation. Watch the video on the project below.

A beloved Oberlin landmark and Oldenburg's first commissioned public sculpture, Giant Three-Way Plug (1970) was conserved with a grant from the National Endowment for the Arts. One of the most problematic concerns was crevice corrosion around the bronze prongs due to contact between the dissimilar metals (the bronze prongs and Cor-Ten steel body). The resulting corrosion put pressure on the bronze, causing it to bow inward as much as half an inch. In addition to the sculpture's conservation, improved drainage at the site ensures that the sculpture will be accessible for future generations of Oberlin students and the general public.

Artist Claes Oldenburg during a visit in 2014, with Giant Three-Way Plug following its reinstallation. Photo by Selina Bartlett

The AMAM acquired Sol LeWitt's 49 Three-Part Variations on Three Different Kinds of Cubes, one of the artist's major early constructions, in 1972. By the mid 1990s the work could no longer be exhibited due to paint cracks and losses, discoloration and other condition problems.

In summer 2004, the AMAM embarked on a two and a half year project to restore the work. The restoration was carried out by ICA-Art Conservation in Cleveland. One of the earliest steps was to collaborate with Sol LeWitt and his curator to determine that the original paint should be removed and then to document that paint for color and gloss so that its appearance could be recreated with different materials. To assist with LeWitt's color selection, his curator visited the ICA to examine the piece before it was stripped of color. 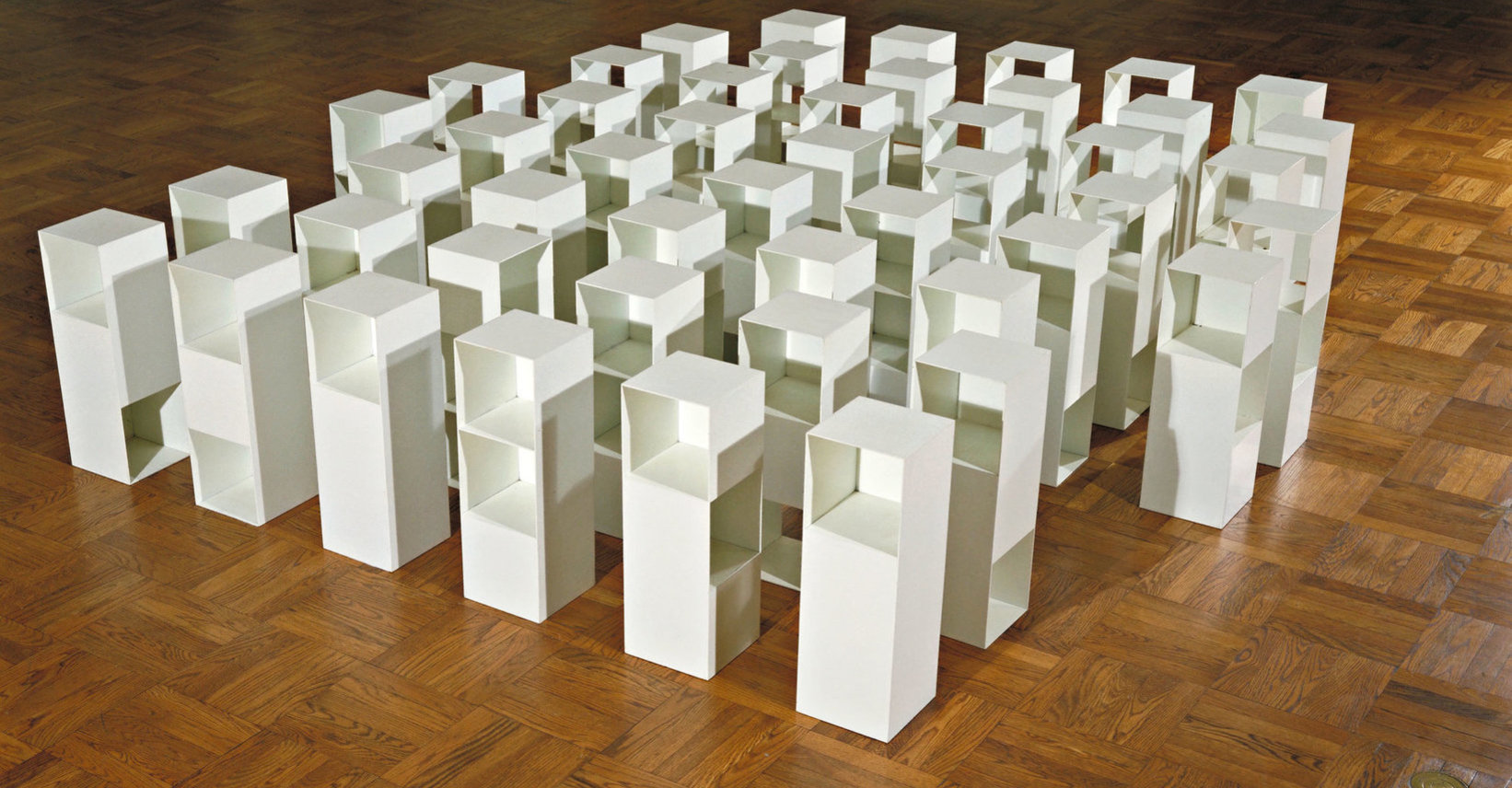 The restoration began with each cube stack being sandblasted to expose the steel. After sandblasting, the stacks were coated in oil to prevent oxidation (rust). They were then degreased by hand and given a wash prime, which was applied to enhance adhesion between the steel and the paint coats. Spray-painting the cubes was especially painstaking, because both exterior and interior cavities had to be coated evenly.

Multiple coats of paint had to be applied to achieve the right coverage and gloss. After each application of paint, the surfaces were scuffed by hand to ensure the adhesion of later coats.